I really think it's going to happen this time.  Everything feels different--I've gone jogging 3 days this week, for goodness sake.  I've never gone jogging a day in my life, other than when forced to in gym class.  I could still eat less, but I've improved my eating and will continue to do so.  Every time I think about eating, I think about Biggest Blogging Loser and turning 30 and Penelope and the promises I've made to myself this time, and I finally feel like it IS going to happen, not like I'm just saying it and trying to convince myself.  And I feel SO HAPPY because I BELIEVE that I'm going to lose 20 pounds and it feels SO GOOD.

Today I did Week 1, Day 3 of training with my Couch to 5k app, and it was mid-morning and light outside and not freezing-ass cold for the first time, and it was lovely.  I came home and showered, and then as I was standing in front of the mirror my face was all rosy and I just felt like I looked better than I have in years.

I don't know if it's endorphins or what, but at the end of my first run on Tuesday and again today while jogging, I got this rush of emotion that I was REALLY DOING IT, and almost started crying.  Happy crying.  I'm even thinking of adding in an extra run tomorrow morning before church so there's not a 2-day gap before starting Week 2, and to take advantage of this crazy warm weather while it lasts--high of 58 degrees tomorrow!  And it was in the 40s already while I ran this morning!  What?  Sure beats the 25 degrees I got on Tuesday. (edit: I did go out on Sunday, but in the afternoon, and mostly walked.  But it was a good bridge from Week 1 to Week 2!)

When I signed up for BBL, I didn't even make the connection to turning 30 at the end of May, but it really is perfect timing in so many ways for my life.  So here are some of the things I'm thinking about doing if and when I achieve a weight in the 140s and maintain it through the end of May:

Next jogging-related thing to explore: borrowing audiobooks from the Philadelphia Free Library.  I'm hopeful I'll be able to borrow & listen on my cell phone so they can work in conjunction with the C25K app.  Right now I'm listening to Musicophilia by Oliver Sacks, and it's quite interesting, but I'd love to try some fiction.
by Unknown at 11:39 AM 6 comments:

2012 Review (I jumped on the bandwagon, but it was a good way to get back into blogging, so sue me.)

I added 2 more resolutions for an even 10 for the year. And a sub-resolution is to fix up the header so it's not dumb, but that needs to happen from my home computer.

2. Did you keep your new year’s resolutions, and will you make more for next year?
I didn't make any last year, but I did this year, because this year I have some big goals that I feel serious about.  Last year I figured was un-plan-able, what with becoming a parent for the first time so early in the year, and I was definitely right.

7. What dates from 2012 will remain etched upon your memory, and why?
January 26th when Penelope was born. (duh.)

8. What was your biggest achievement of the year?
This is already getting old, but I gotta be honest, so: becoming a mom. I'll change it up a tiny bit by adding, becoming a *working* mom. It's not just my achievement because I had SO MUCH help from family, but it's working out even better than I hoped, and it feels like a pretty huge achievement.  (I hope hope hope that next year's answer to this question will be "losing 20 lbs"!

9. What was your biggest failure?
I'm going to say financial planning.  We let our credit card debt get way too high in 2012.  My top goal for 2013, along with losing weight, is to have NO credit card debt again.

10. Did you suffer illness or injury?
I've had a lot more colds than before I was pregnant, but thankfully that's it!

11. What was the best thing you bought?
Minivan.  We sold our 1998 Chevy Malibu on Craigslist (which went surprisingly well!) and paid the full amount from that to my parents for my Mom's 2005 Dodge Caravan after she got a brand-new Honda CRV.  Everyone wins!  I actually learned how to drive on a minivan, so driving it just feels like going back to normal.

12. Whose behavior merited celebration?
Oh, so many people in my family.  Penelope's, Paul's, and my Dad's especially.

13. Whose behavior made you appalled and depressed?
A slew of politicians, but what else is new?

14. Where did most of your money go?
Mortgage, medical bills, and, no doubt, gas for the minivan.

15. What did you get really, really, really excited about?
I got to witness Penelope's first-ever roll.  She's had tons of milestones, but that was the first big one, and it's the only one that truly happened all at once, AND I got to witness it.  Not to mention I got it on video.  It was pretty great.  (Oh, and I guess having a baby was pretty exciting too.  So.)

17. Compared to this time last year, are you:
a) happier or sadder?
b) thinner or fatter?
c) richer or poorer?
a) Happier
b) Thinner because I'm back to pre-pregnancy weight, but that's it, so it feels like the same.
c) Childbirth + raising a baby + paying for husband's classes = poorer.

18. What do you wish you’d done more of?
Anything more productive than watching TV.  But see #32, so hopefully all the TV wasn't a total waste.

20. How did you spend Christmas?
Christmas Day was spent 100% at our house.  My family came over in the morning, and Paul's in the evening.  PJ and I both had colds, but still managed to have a lovely day, although I was sad to not be able to taste my dinner.

21. Did you fall in love in 2012?
Cheesy, but oh yes.  With Penelope, but also with my husband in the role of father.  It really is like falling in love with a whole new person, and it might be my favorite part of becoming a parent, meeting Paul the Dad.  In that same vein, I also got to fall in love with MY dad again in the role of JayPop.  JayPop takes care of Penelope four mornings a week while Paul is at class, and they have a really special bond already.  It makes my heart melt just thinking about it.

22. What was your favorite TV program?
We watch everything after the fact on Netflix, so I could say something totally old, but I'll go with...um...Oh, I've got it.  Sherlock.  The BBC show that airs on PBS's Masterpiece Classics.  Can't wait for the 3rd season this year!!  (If I had just said "A BBC Show that airs on Masterpiece Classics, you totally would have guessed Downton Abbey, and you wouldn't have been wrong there either!)

23. Do you hate anyone now that you didn’t hate this time last year?
This is going to make me sound like a kind of person you want to slap, but...I kind of don't believe in hating people.  I hate people for brief periods when I'm angry, but part of calming down always involves thinking about what made that person do or say whatever made me hate them, and then I can't continue to hate them after that.  So, no.

24. What was the best book you read?
I read 12 books in 2012 if my Goodreads is to be trusted, which is more than I realized!  I think I most enjoyed A Discovery of Witches and its sequel Shadow of Night, and on the more literary side I also really loved The Tiger's Wife.  I just finished The Night Circus, and it is my hands-down favorite, but I read most of it in 2013 so I don't know if it counts.

25. What was your greatest musical discovery?
Not exactly a discovery since it's so super popular, but I'm so totally on the Mumford & Sons bandwagon.  I loved Roll Away Your Stone the first time I heard it, and more every time after that, like I haven't loved a song since I was a teenager.

26. What did you want and get?
A happy, healthy, amazing daughter.  Also, a minivan. Oh!  And!  A productive garden, particularly in the tomato department.  We had some delicious tomatoes this summer.

27. What did you want and not get?
A finished basement playroom.  Area rugs for the bedrooms.

28. What was your favorite film of this year?
I went to maybe 2 movies in theaters, and watched a few more on Netflix, but I don't even remember what.  So apparently nothing good enough to stick in my head...

29. What did you do on your birthday, and how old were you?
I turned 29.  I think we had friends over for a picnic, but I don't remember for sure.

30. What one thing would have made your year immeasurably more satisfying?
I don't think it would be possible to make it *immeasurably* more satisfying, but if I could pick one big thing to have accomplished that didn't get accomplished, I'd pick finishing the room in the basement.  I will be so happy when that finally happens.  I hope it happens this year, but I'm not positive it will.  Oh, hey, I just thought of something that might even qualify as immeasurable:  If we could afford to pay someone to clean our house every two weeks, that would make my life easier and improve my mental health in ways I can't adequately describe.

31. How would you describe your personal fashion concept in 2012?
Nursing-friendly tops, jeans, comfy shoes, and a little bit of flair up top with a pixie haircut and big, dangly earrings.

32. What kept you sane?
A lot of Ben & Jerry's and loafing on the couch watching Netflix.  Hence, New Year's Resolution #1.

33. Which celebrity/public figure did you fancy the most?
President Obama.  I still love him.  Also Hillary Clinton, I hope she runs for president again so I can vote for her.

34. What political issue stirred you the most?
The right (yes, I said it) to affordable healthcare.

35. Who did you miss?
My grandmother and great-aunt.  They were twin sisters.  My grandmother died a few years ago, and her sister died when I was still a kid, but I have thought about them a lot this year because of how much they would have loved meeting Penelope.

36. Who was the best new person you met?
Um.  My daughter, obviously.  A truly new person!

37. Tell us a valuable life lesson you learned in 2012.
There will be another sale on baby items tomorrow, or next week, or next month, and it will be just as good as this one, and therefore I do not need to buy whatever it is just because it's on sale.  Now if only both of PJ's grandmothers would learn that one...

38. Quote a song lyric that sums up your year.
I spent a lot of time in my actual home, but I can't help thinking of the song "Home" by Edward Sharpe & The Magnetic Zeroes:  "Home, let me come home; home is where ever I'm with you."
by Unknown at 9:51 AM 28 comments:

I downloaded the blogger app, so let's see if I post occasionally now. I'm participating in Biggest Blogging Loser starting Monday, so it would be nice if I, you know, blogged sometimes. Ever. Here, have a picture of my baby: 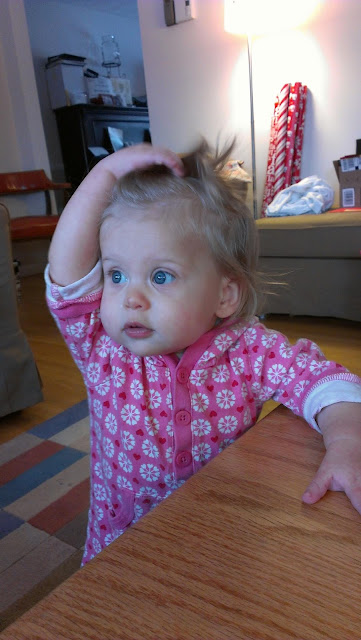