here i am sitting in the same cafe (inside this time) with the 'rents...han is at class all day. we're having a quick morning drink (double cafe, hot chocolate, and spanish hot chocolate) before we head to carcassone for the afternoon.

we've been to a bunch of great places:
sunday here in toulouse we, with han's friend pam, went to a flea market at the foot of st. sernin basilica, and i bought a flute! more about that later. we also got some neat postcards, jewelry, and fresh delicious olives for lunch.
albi on monday without han is toulouse-lautrec's hometown with a great museum, and on the way there we stopped at a beautiful winery and had our own private wine-tasting.
wednesday in rocamadour (once we found our way out of toulouse) was an amazing little town climbing the side of a cliff, with a cathedral built into the side of the cliff, and an amazing view from the top...not to mention a flamingly gay store owner! han had a play to attend for class on this evening, so mom, dad, and i had dinner on our own and tried foie gras - it was delish! we all liked it prepared three different ways, including raw!!
in cahors we got an expensive but delicious block of cheese at an outdoor market, then drove to st. cirq lapopie for even more spectacular views than rocamadour. unfortunately, the weather was pretty awful...we still managed to find another open winery so han could experience it too. dinner this night was at the cabanis's apartment, where han has been staying, and all four of us enjoyed trying rabbit for the first time - mme. cabanis is a wonderful cook! dad says the rabbit was as good as any turkey he's ever had.
today han's in class again, and we're going to carcassone, a walled medieval city famous for its part in the crusades. han has asked me to get her a patch for her backpack and a sticker for her car, if possible, which she already has from andorra. han has been to carcassone with her friends.
tomorrow is friday, our last day here. we'll stay in the city, pack, shop, and perhaps visit another museum. for dinner, we're taking four of han's friends out to dinner - pam from mansfield, wenke & frederika from germany, and sanna from finland. i'll stay in my parents' room on friday night so we can leave before 5:00am (yuck!) to catch our plane.

Happy Thanksgiving from the Killians in France! I need to quit writing before dad gets too impatient to leave, and mom makes me write anything too corney.
by PeaceLoveMath at 4:06 AM 1 comment:

i am in france!

i am sitting on the corner of la place des armes et la rue pharaon at a coffee bar and vegetarian cafe called numeroC. hannah often comes here to get online, since they have wireless internet access...i am waiting for my lunch, which is going to be mostly a surprise, but it involves brussle sprouts, which was one of the english words the waitress could remember for the french menu items. hannah assured me they have good lunches here, so i'm not worried.

it's a warm but very windy day, so i still need my light scarf and jacket; about 19 degrees celcius, which i think translates to the hi 60's. han has some school work to catch up on today after her classes, so after this i'm going to walk around, shop, and entertain myself until about 4:00. yesterday we went shopping, but all i bought was an inexpensive (but cool!) scarf...and hannah bought a shirt and a pair of (not so inexpensive) shoes! So she told me that by the time we meet up this afternoon, i better have spent some more money. i don't think lunch counts, i think she wants me to buy clothing, haha.

ah, here is my cafe au lait! it smells wonderful, looks like a cappucino, and comes with a little biscuit. right now, too hot to pick up. across the street is a petit casino, a chain of small grocery stores. right now, it's closed - most french businesses in the city close for an hour or two over lunch! except for restaurants and cafes, of course.

last night we went to a shisha bar (i spelled that wrong, aka a hookah bar) with han's friend pam, also from mansfield; frederika and wenke from germany; and sanna from finland. we drank delicious tea, shared a hookah, and had a lovely evening chatting. all of han's friends love talking and sharing about their countries and lives, it's so interesting!

yesterday for lunch, han, pam, and i got chevre miel panini's (again with the spelling), which is a long roll filled with goat cheese and honey, and grilled. sound odd, but is quite delicious! then last night han took me to her favorite kabab place, where we got "kababs" consisting of lettuce, tomato, chipped beef, french fries (i know! they were fresh-made from the potato, tho!) and a white sauce, all wrapped in fresh fried flat bread. it was yummy, han's toulouse version of a burrito.

my lunch et ici! it is a simple salad with a vinagrette dressing, a homemade roll with bits of carrot in it, and the main course is a ratatouille with couscous (i think), eggplant, zucchini, and a tomato sauce, topped with two skewers each containing three fried brussle sprouts. on the side is something like hummus, which is quite tastey as well.

i've just finished eating and started typing again, and there is now a busker playing the violin!! i'm so glad i sat outside. this is so great! wow. i will tip him when i get up to leave. nice thing about restaurants here is that tips are not only not expected, but you really shouldn't give them because it is sometimes considered insulting...ooooh, the busker came around for tips - well, that's good. i gave him 50 cents, or whatever that is in euros...oh, but he's leaving now, i guess buskers here don't just sit on one corner for hours...so only that one song. still cool. he was tres bien.

i'm getting chilly out here - the sun's moved, so the whole intersection is now in the shade, and the wind hasn't let up. i think i'll get going and do some shopping, and hopefully everything will be open again now that it's after lunch.

au revoir!
by PeaceLoveMath at 7:38 AM 4 comments:

i just checked in at airfrance.com!

my flight is in less than 24 hours!

i have a window seat!!

...no, i'm not pregnant! that wouldn't be so good just now, haha. i will tell you all the other big news after i get back from france and have squared it away with my boss at SAIC.
by PeaceLoveMath at 8:24 AM No comments:

I took this advice to heart a bit too much last night...

Weddings, Halloween, and lots of pictures

Photos from Jo's wedding are here and here. The first set are mine; the second set are from Iona, the groom's sister.

Halloween photos of the cool cookies I baked, and Paul's costume...can you guess what he is? 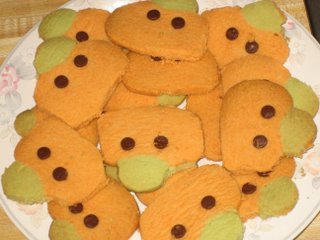 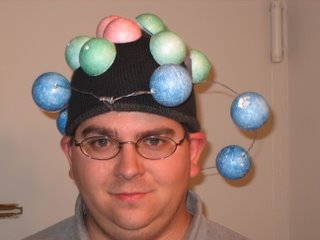 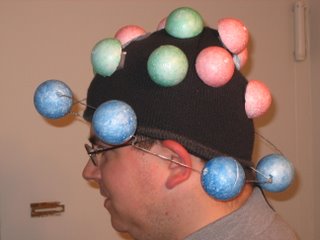 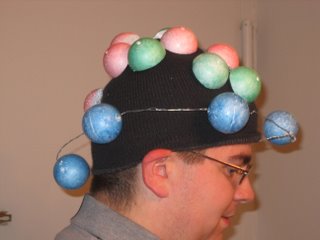 See the answer below, typed backwards...hehe

I can't wait to really dig into wedding plans as soon as I'm back from France...according to theknot.com, we're already behind on some things...but the date is set and the church is reserved, so I'm not worried...as long as we actually get married!! I think I'd like to do an engagement announcement in The Patriot News and The York Daily Record...and then next order of business is guest list and food.

Speaking of food, I'm eating a lot less so that I can fit into my Mommy's wedding dress by next year!! Finally, something that seems to be really motivating me to diet. My fingers are crossed...current waist measurement: 37.5"

Let me re-iterate: my wedding is going to be relaxed and non-stressful. Leave suggestions, but first imagine yourself being in charge of that thing on my wedding day, and if it gives you a tight feeling in your stomach, don't bother mentioning it!

I might be posting one other bit of big news soon...depending on when I get a chance to talk to my boss...so perhaps not until December. Stay tuned...