Penelope's starting to string 3+ words together pretty frequently. A sampling from the past few days:

Pointing up to the owl ornament hanging from the small Christmas tree on our mantel: "Oh-lul tee up der!" (Owl tree up there!)

Indicating her huge creepy plastic inherited baby doll that we keep on top of her bookcase: "Baby seepin up der!" (Baby sleeping up there!)

This afternoon as I finished up working at our computer with the door closed, from the hallway I heard: "Mommy workin now!"

"Oopsy daisy oopsy daisy!" when anything is slightly different than she thinks it should be

"AbaDABa!" which she uses to refer to her wand, and also says while waving her wand, along with "poke pocus!"

"Happy BOOTday!" which she says repeatedly while holding an electric candle, and also says to refer to the candle.

"No touchin!" and "One fin-doo" (finger), which she often says when she knows not to grab something...often while she's grabbing it anyway.

"Yight on!" when she wants to play with a light switch

"House" is anything she bunches together, such as puzzle pieces; the same puzzle pieces (or, last night during dinner, green beans) in a line become "train!"

It's also so fun to get her to repeat stuff, like when we spun her around in the office chair Paul got her to say "inertia" and "angular momentum"! 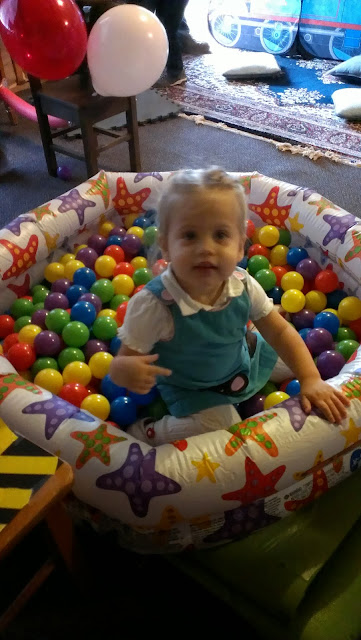