I worked so much already this week that I only need to work 2 more hours today to get to my 40 hours, but I have a bunch of corrections to make to my tier 2 EAC, and then at 1:30 I will be spending the rest of the afternoon on the phone with my replacement in Ohio training her. I don't know how long that will take, but my plan is to finish the EAC before 1:30 and then come home as soon as Cindy and I are done training on the phone. I'll have more than a few hours of overtime, but that's a good thing because it's only the first week of the pay period, so this way I can have some flexibility next week and spend a little more time at home helping Paul unpack and clean and paint. And that's a good thing.

Pictures of our apartment in various stages of un-packing coming soon...maybe on Sunday evening.
by PeaceLoveMath at 8:24 AM 2 comments:

My professional wedding pictures are up!!

My perm on its day of birth. The curls should look a bit softer once I'm allowed to wash it and style it myself - I'll use something softer than gel to separate the curls. Besides that, I like it! I can finally wear a head scarf and it doesn't fall off!! 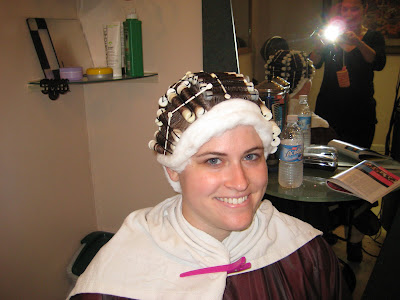 That's my hairdresser Dawn in the mirror taking the picture. 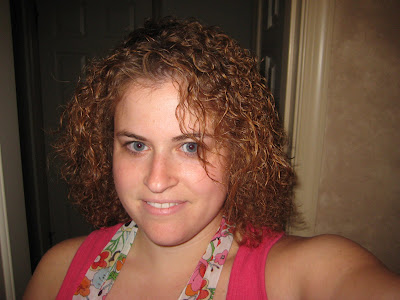 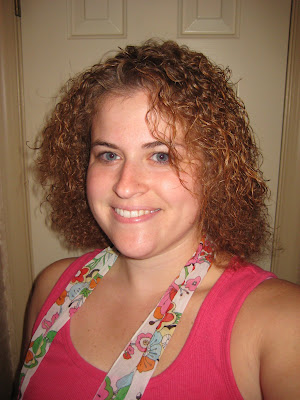 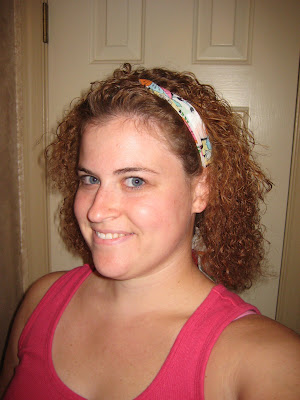 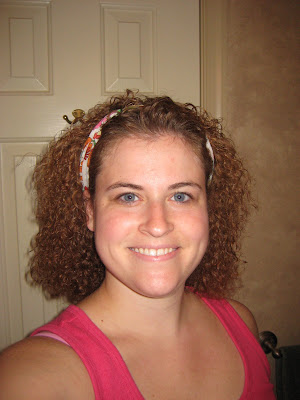 As you can see, I also figured out how to rotate images so they're saved that way on my computer and thus show up correctly when I upload them to my blog. Yay!

Oh, and in other very important news, Paul and I officially have an apartment in New Cumberland, PA. I signed the lease tonight. The owner is a nice little old man who lives next door in a cottage. Our apartment is the first floor and basement (half finished) of a house, and a nice little old lady lives on the second floor and has been there for almost 40 years. The house is in a cozy neighborhood setting just off of Bridge Street, which has lots of cute shops and restaurants and such.

We have a big front porch, a little back porch perfect for a grill, and washer/dryer hook-ups in the basement (in the un-finished but still tidy and well-kept half). The best part: rent is $300 less than we're paying now, and we only have to pay electric, and the heat (gas) is paid by the owner. That means the summer electric bill will be about the same or higher than we're paying now (to run at least one window air conditioner), but the winter bill will be quite a bit less than we're currently paying. With the $300/month we're saving, we will buy a washer/dryer and some more furniture to fill the place, which is plenty bigger than our one-bedroom! I'm quite excited. You're all invited to dinner once we're settled in. Just tell me when you can come, and I'll cook dinner for you (and give you the actual address, of course). The kitchen is quite small, but it has a gas range (yay!), and we have a plan for more counter and storage space in the dining room (Ikea, here we come!).
by PeaceLoveMath at 10:12 PM 4 comments:

Aarrr, it be National Talk Like A Pirate Day!

So avast, me scurvy mates, and make sure to exercize your inner pirate today!
by PeaceLoveMath at 10:48 AM No comments:

I've been trying to settle on a title I like for this blog for a while. "I'm Finally" was just supposed to be temporary until I thought of something better, but it kind of grew on me, so I decided to bring it back for good...but updated to reflect my new marital status! My Mom told me that she liked taking "I'm Finally" and trying to complete the thought using the title of each post, which I hadn't thought of, but now that she mentioned it I'll probably subconsciously make my post titles fit now.

So I'm married. WE'RE married. Paul and I officially started dating on January 26, 2001 after hanging out quite a bit starting at the end of summer 2000. It was all long-distance until he moved down to Virginia with me in January 2006 (except when we both worked at Nawakwa, but there's precious little time to be alone and comfortable together while working at a summer camp), and especially while I was at school there were some rough patches involving teary late-night phonecalls, but now we've really made it and we couldn't be happier!!

The photographer hasn't posted our pics on his website yet, but I'll post a link right away when he does. It's great, he just puts a dump of all the photos on his website without even a watermark over them or anything. He doesn't give the full-size photo, but it's big enough to print a 4x6! I haven't seen any pics from the actual ceremony yet. I just saved all of Kelly D's from facebook, so now I at least have a few from the reception. Here are some that give a nice summary of what I do have, from bachelorette to honeymooner (I can't figure out how to rotate mine, so some are sideways):


I can't wait for our photographer to post our pictures so that I can finally see stuff from the actual ceremony, like my musicians, flower girl, etc.

In October while I'm working on thank-you notes, I'm also going to mail blank CDs and addressed, stamped envelopes to anyone who has digital pictures so that I can have their original full-size files for myself, so keep an eye out for that. If you feel like taking the initiative and making me a CD yourself, mail it to my parent's address for now until I have our new address (hopefully by the end of next week). Also, let me know if you think you have more than 80 MB worth of pictures, and I'll send you two or three CDs!

For the time being, I'm happy to be calling Paul "husband" all the time, and hearing him call me "wife," and never taking my wedding band off, and making plans for our move back to PA. With one wedding before Thanksgiving, another before Christmas, and us living back in Central PA, it's going to be a really fun end to 2007!!
by PeaceLoveMath at 10:03 PM 2 comments: