November has also been awesome

I didn't intend to wait so long that my next post would be another month wrap-up, but I guess that's what happens when it's been a busy and productive month: I spend very little time on the computer outside of work because I really am enjoying all the house upkeep and improvements, plus I'm finally getting back into knitting and crocheting almost every day, taking care of Juno, and actually using our Netflix subscription for a change, which means time most evenings spent curled up in front of the TV with Paul for a bit. We've finally gotten into the groove of 30 Rock Season 3 on Netflix Instant View streamed on the xBox, so that has helped. But it all adds up to a lot less time spent in the office on my computer doing things like blogging and uploading photos.

So let's see. I started out the month of November by washing my cell phone, which resulted in a dead cell phone. I went into the Verizon store all prepared to have to pay full price for a new phone, only to find out that I had again managed to kill my previous phone only days before my "New Every Two" discount kicked in, so I was able to get a discounted phone instead! Very fun. I got this phone and I like it a lot. It's very fun to have a full keyboard now that we have unlimited texting. Now if only Paul would take advantage of his discount to replace his phone, which is at least 4 years old at this point...

We also had lots of fun parties and gatherings this month, in no particular order: Dinner out for my mom's birthday
A surprise party (that wasn't too surprising, but still very fun) for Mindy's birthday
A football party at Shawn & Rachel's that Paul went to without me because I had to sing in
A choir concert (the choir concert was quite awesome, so I didn't mind too much)
What turned into quite the party at Isaac's in Lemoyne for the Nawakwa fundraiser (so many people showed up that they ran out of various foods)
A really fun night out with some of the usual suspects at Macaroni Grill followed by going to see New Moon, which we all thoroughly enjoyed. Especially "Face Punch" and Jake's abs (although Luke only enjoyed one of those, I'll let you guess which one) (btw, Luke was the only guy at the movie, and it was his choice to be there; in fact, he's the only one who re-read the books ahead of time, so he was actually the resident expert on how accurate the movie was. And if you make fun of him, you will get facepunched!).

Then, of course, Thanksgiving. Paul and I hosted for the first time, with five people total: us, and Paul's parents and sister. It was definitely a success: I made a cheese log, Paul dressed the turkey, I made my dad's stuffing, we used frozen CSA green beans and a bunch of colorful carrots (orange, white, and purple) to make some lovely side dishes, roasted garlic mashed potatoes, and topped it all off with Apple Kuchen and homemade vanilla icecream, all served on my Gommy's nice china that she gave me when she moved into assisted living. I also got to use other wedding gifts, which always makes me happy: the hand-thrown stoneware casserole for mashed potatoes, and the terra cotta roasting dish for the carrots.

We watched the Macy's parade followed by the dog show, and I tried to show Juno the Italian Greyhound in the toy category (who made it into the second consideration but then didn't place in the class), but she was only interested in getting back to her bed and curling up. Here are some pics of our preparations the day before, and of course the day of; I only forgot to take a picture of the table when it was all layed out with food.

The beaujolais nouveau finally did get drunk when Hannah brought over two of her friends to see the house, and the four of us polished it off in ten minutes flat. I only got about 1.5 glasses, and it's particularly good this year so I bought another bottle yesterday. 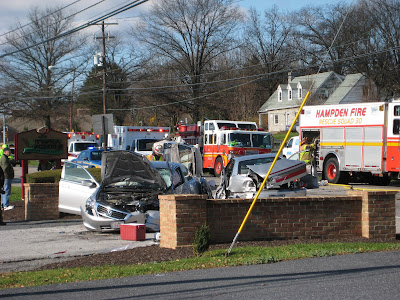 Paul had to work Friday and Saturday, so I took lunch to him both days, and because I did on Saturday I got to see this crazy accident in front of the apartment complex next to the store. In addition to the two totally effed up sedans in the foreground, note the Escalade on its side behind the Honda.

Then on Saturday I went down to Lebanon with my mom and Han to see some of those family members, and it was fun to show Gommy the pictures from Thanksgiving with her china. Saturday evening we met up with Sarah and Matt in York, and it was very fun to see them, as usual.

Sunday afternoon was spent in much the usual way, with minor housework and some lounging around. I finished making a little wreath by crocheting around a cardboard ring from some packaging, and it turned out really cute, so I'm working on another one now. Then in the later afternoon I had the urge to do some yard work, so I ended up cutting down all the dead flowers in the front garden and raking them out, and now you can see our lamp post. I will hopefully find something Christmasy to decorate it, but for now it's completely visible for the first time since May. 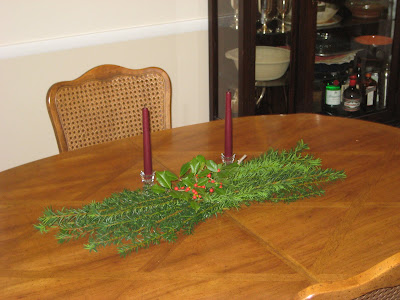 I also trimmed one out of the three evergreen shrubs under our front windows, and used the longer pieces to decorate the dining room for Christams. I bought two pine bundles from the local garden shop earlier, and added some holly from our holly tree (which, btw, is really huge) to those as well, but of course I'm most proud of the decorations that cost me nothing but some effort with the hedge trimmer followed by some string. 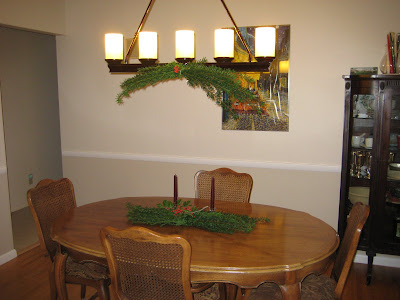 I might just use the trimmings from the other two bushes to decorate the lamppost too. Nothing beats free, especially when it comes to Christmas decorations! Plus then I can justify spending money on some new placemats, since the only set I have is decidedly fall-colored, as you can see in the Thanksgiving pics above.

I hope you had a wonderful Thanksgiving, and continue to have a relaxing and happy holiday season!
by PeaceLoveMath at 10:18 AM