While I was gardening yesterday evening, I had Juno in her harness attached to our clothesline in the backyard so she could hang out outside with me.  I've been using this setup frequently since last Saturday, and she's getting used to it and obviously enjoys it -- she even figures out how to unwind herself pretty quickly if she gets her leash wrapped around a pole.  It's a good setup.

You should also know, if you don't already, that Juno is debarked.  She already was when we got her - the puppy mill that raised her and bred her must have done it to all their dogs that they weren't planning to sell.  It means they surgically cut her vocal cords, and many people consider it cruel.  Most dogs can still bark afterwards, just much more softly -- it sounds like a hoarse or whispered bark.  Juno has never made a peep, so we assumed she couldn't, and we've always wondered if her inability to bark was part of the reason for her extreme timidity.

Well, last night, Juno remembered how to bark.  She was on the opposite side of the yard from me, with her nose pointed challengingly towards the side yard and the street, barking like it was something she did every day.  I could hear her clearly from the garden, but it wasn't until I looked at her and saw her barking that I realized what it was.  She stopped when I said "Juno!  You're barking!" but she started up again a few minutes later, and again after Paul came out to hear for himself.

She was back to her usual silent self all evening, but this morning I clipped her to the clothesline again while I watered the tomatoes, and after a few minutes she went back to the same spot, pointed her nose in the same direction, and practiced barking some more!  This time I noticed that, while she's barking, her tail actually wags from side to side like a normal dog's -- something else we really haven't ever seen her do.  A few months ago when she met a friendly bulldog I thought I saw her tail wag one time, but since it stopped immediately I couldn't be sure.  So now all at once, it seems our little Juno has figured out how to wag her tail and bark.

Now that she's maybe starting to come out of her shell a bit, we will see more of the Juno we saw on Easter Sunday and I can get some more pictures like this one, where she isn't curled up into a sad and pathetic little ball! 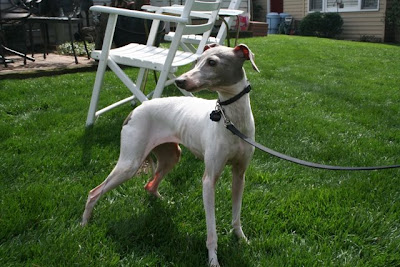 I'm hoping to get a picture or video of her barking tomorrow evening or Saturday while I'm out planting the rest of our garden, so stay tuned for that, and for the next garden update I hope to post on Saturday evening or Sunday afternoon!
by PeaceLoveMath at 2:50 PM

Email ThisBlogThis!Share to TwitterShare to FacebookShare to Pinterest
Labels: Juno