Dinner on the Moon

PJ had been asking for a couple days that I help her color on her spaceship (a cardboard diaper box) to improve it, and Sunday evening we finally did. She instructed me to draw a steering wheel; allowed me to draw a throttle lever thing once I explained that pulling it would make her spaceship go faster; drew some gauges; and at her repeated and fervent insistence, plenty of buttons.

For future reference, the Crayola colors that show up best on brown cardboard are the sparkly jewel tones. Luckily these are exactly the colors you'd choose anyway to draw robots and spaceship consoles for your imaginative daughter.

In the back, she had me draw a robot "to sit behind me and be my helper" because, she explained sagely, "every spaceship has a robot helper." (Where does she get this stuff??) After proclaiming her satisfaction with my robot drawing, she packed her ship and we blasted off to the moon "where our robot friend lives, so we can eat dinner with him."

Once we landed on the moon, daddy told PJ her dinner was ready, so she stood to get out of her spaceship and--here is the part that completely blew my mind--she pantomimed taking off her space helmet, spacesuit, and space shoes. It was very obviously three distinct things, and I could tell what she was doing before she said a word about it: she lifted the helmet off her head, pulled down & climbed out of the suit, and then pulled off each shoe. I also had to take off these three elements of my spacesuit, PJ reminding me, "don't forget to take off your space shoes!"

She continued to talk about eating dinner on the moon throughout her real dinner. The completeness and level of detail in this whole spaceship saga was just amazing. I am in awe of this kid. Also beyond thrilled to have a cardboard box spaceship in my living room. Maybe next we can make a transmogrifier!

I was so blown away by PJ's pretend play Sunday evening that I was still gushing about it while Paul and I lay in bed late Sunday night.

Not to leave Max out, he is of course delighting us daily too. He had been back to 3 wake-ups to nurse per night since we left for the beach, but Saturday night suddenly only woke up once, and Sunday night I'll call it one and a half times because he woke up again shortly before 6:30, so I did lay down with him and doze a tiny bit more while he nursed before getting up. He can sit up unsupported for a minute or two at a time, something I really want to make him do daily now so that he'll get better at it, because what he wants to do while you're hanging out with him is stand. I keep telling him he needs to learn how to sit first, so maybe he'll get that memo in the next couple of weeks. He is very quick to grin and giggle, and loves when daddy puts him belly-down on top of daddy's head and rubs his belly. My favorite way to get giggles is by kissing him all around his mouth--he loves it and leans in, and I especially love it when he presses his slobbery open mouth against my face to give me kisses back!

PJ has been taking more and more interest in her little brother, and when she decides to play with him, Max loves watching her best of all. I love that she mimics us saying, "hey buddy" and "it's OK" to him. She also likes to ask him questions and then answer on his behalf, which is often hilarious. 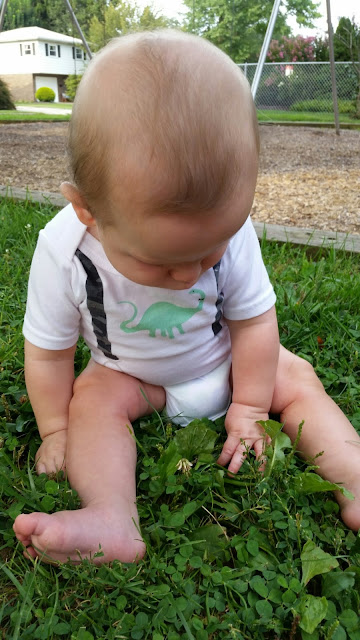 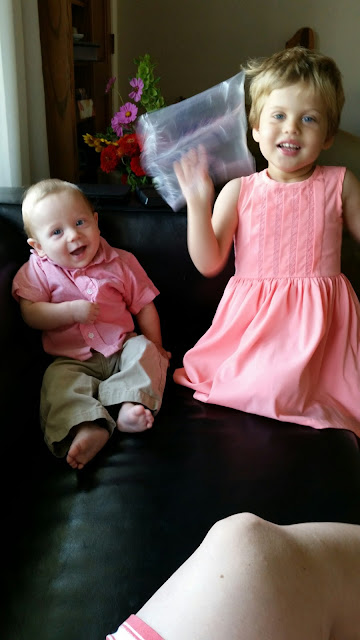