I think this qualifies as an "old favorite" to go with the theme, although I didn't learn to like (ahem - I mean LOVE) lo mein until late High School. So for people like my sister who have loved it their whole lives, it qualifies.

I used this recipe to figure out what to do, since I've never made lo mein before (otherwise it wouldn't qualify for Whip It Up, duh!):

I made stir-fry last night, a dish I have made many times, and we had (a) lots of leftover veggies from that, and (b) lots of leftover chicken from our delicious grilling experience last week. So I skipped all the parts above where you cook the veggies, added some chicken (also left over) to the hot oil first (it had been in the fridge for a few days so I wanted to get it nice and hot first), then added the leftover veggies right before adding the noodles to the pan because the veggies were already cooked and just needed to be heated.

The other major tweak was that Paul got rice noodles so we wouldn't have such a heavy meal. I really want to try it again with semolina, but it was also delish with the rice noodles! Plus even quicker because you only need to soak the rice noodles in water for a bit, no actual 6 minutes of boiling required.

I also added some corn starch (1 Tablespoon) to the reserve water/soy sauce mix because I was worried it wouldn't be thick enough. The rice noodles, though, soaked up everything immediately, so I ended up adding more soy sauce (honestly, the lower sodium Kikkoman tastes NO DIFFERENT AT ALL, and it has the exact same ingredients just with less salt, so I have no idea why anyone would buy anything else) just to give things a better color and a bit more moisture. I think a pound of rice noodles has more surface area and soaking-up capacity than (and thus needs more sauce than) spaghetti would.

And lastly, I augmented the canola oil with some sesame oil (a Tablespoon or so) to add some extra Asian flavor because I didn't have the five spice thing - Sesame oil is a really delicious thing to have in your cupboard, I highly recommend it. Adds lots of really great flavor! Kind of expensive, but you don't use much, so I've had the same bottle for over a year. It is getting pretty low, I will need more soon. 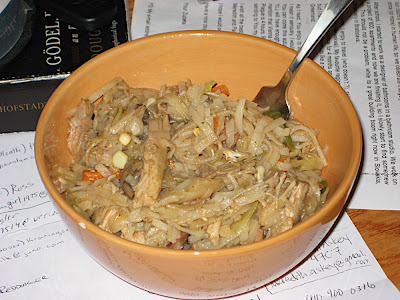 So was the recipe easy to follow?
Yes, very. Not only was it easy to follow, but it was all much simpler than I expected it to be. I had no issues whatsoever.

Did it taste good?
VERY good, and it was much less greasy than restaurant lo mein usually is! It was seriously delicious. And every few bites I'd get a burst of sesame flavor, or some other flavor, and it would be even better.

Would you make this again?
Yes, definitely. Stir fry (with tons of veggies and occasionally some leftover meat) has been a part of our repertoire for a few years, and we both love it so much that we get into kicks where we make it every week or more,so this will be a nice variation to add to our regular rotation. Next time I would like to try it more closely to the recipe above, specifically try using semolina pasta, but I think we'll also definitely do it with the rice noodles again, and most definitely as a way to use up leftover veggies and meat again - no microwaving them to reheat, just toss it all in a pot with some fresh noodles! By using the leftovers, this honestly took me less than 20 minutes start to finish, including prep and cooking time. It would have been a teensy bit longer if I'd needed to cook spaghetti from the box, and with fresh veggies (I'd almost definitely always use more kinds of veggies than the recipe calls for) it would take longer, but if you wanted to make it fast and didn't have leftovers in the fridge you could get a frozen Asian veggie mix - my grocery store always has a variety or two of stir-fry veggies, some with water chestnuts right in there (we looooove water chestnuts), so that would eliminate the time spent chopping veggies.

In case you hadn't noticed, I rarely follow a recipe exactly when it comes to dinner foods. I meant to find something even more brand-new to me for this week and actually try to be faithful to the recipe, but maybe next week! There's just always something that I think, no, that doesn't sound as good as doing it this way; or something that I want to add more or less of or substitute for something else.

And in case you were curious and haven't done stir fry yourself before:
Veggies we like to use for stir fry, in various permutations depending on what we're in the mood for and what we have on hand
Cabbage, carrots, snow peas, broccoli, onion, garlic, mushrooms, bell pepper, water chestnuts.
In my leftovers I had some corn, so I even threw that in, altho I've never included corn in stir fry before.
For meat we use leftover chicken mostly, and occasionally leftover pork; if we don't have leftover meat to use, then we just do the veggies.
Saute everything in a little bit of oil until they're tender (or whatever doneness you prefer your veggies), add some pepper and whatever other seasoning you enjoy, and serve over rice with soy sauce (low sodium!). Sometimes I add some soy sauce and/or worcestershire sauce to the veggies. If I had a bigger pan, I'd add the cooked rice to the veggies, but I usually end up making too many veggies to fit the rice in, so we usually just put the plain rice in our bowls and top with the veggies. It was quite a squeeze to fit the noodles and the veggies all in the saute pan for the lo mein! I need to get myself a wok at The Restaurant Store. 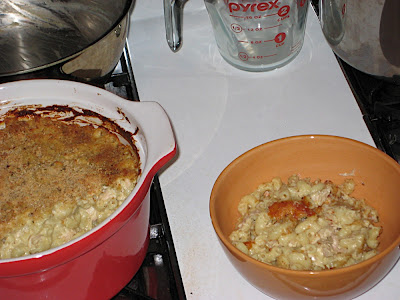 My pictures are so plebeian compared so some of the other participants. I can take nice photos, I'm just too busy cooking and subsequently eating my dinner, which I am usually extremely hungry for by the time I finish making it, that I never feel like taking time to set up a good photo. Plus it's always dark outside by the time I'm done, so I don't get to use natural light, which of course would look much better. Hopefully next week when I try a recipe from one of my many cookbooks, I will also find time to take a more deliberate and high-quality photo.

* I have no earthly idea why, but the original recipe says to use a Dutch oven for this step. Just use a regular old pot, for crying out loud. I have one of those pasta pots with the built-in sieve - best. invention. ever.
by PeaceLoveMath at 9:34 PM