First of all can I just say, OMG I LOVE BARACK OBAMA. Please vote for him. Thank you.

OK so I know, I know, I promised Key Lime Pie. But Paul tried it on Saturday, which was too soon, and we're going to make another one on Sunday, which is too late (but, luckily, just on time for my dad). Thus, Shaker Pineapple Cake.

In need of a recipe, today at work I said aloud to the general cubicle population, "Does anyone have any good dessert recipes?" and lo and behold, my fellow Project Controller and next-door cubicle neighbor Michelle said her sister had recently e-mailed her some favorite dessert recipes. She printed them out for me, and here we are. The other two are banana-y, but the one that sounded great to me is this one:

2 eggs, beaten
1 20 oz can crushed pineapple in juice (not syrup - mine has no sugar added)
2 c flour
2 c sugar (this is where the sugar is added, haha)
2 tsp baking soda
1 c chopped walnuts

Cream Cheese Icing (this is where the fat comes in)

I made my cake in two round cake pans and did a layer of frosting in the middle as well as around the outside. It was delish. And best of all, it looked nice in my cake carrier, which I plan to use to take it to work with me tomorrow (after Paul and I have each had a piece tonight).

Actually, the icing was rather runny - not sure why, plus I kept adding confectioner's sugar to try to thicken it up, but with no luck. Still delish, though, so no real complaints.

Was the recipe easy to follow?
Uh, yup. And since I scraped out the batter bowl into the cake pans, I just re-used it for the icing, so there were minimal dishes for a typical baking episode.

Did it taste good?
Yup. Quite rich, but I think I'll be more in the mood tomorrow at work when I haven't just had a big dinner. The cake was nice and moist, and the icing was super tasty (despite the runny-ness).

Would you make it again?
Yes. I might even play around with some flavors, like I thought of adding some shredded coconut to the frosting, or maybe even to the cake. Mainly to the frosting though - I think that would be very tasty, and would add some fun texture to the frosting.

Additional tip:
I went to the trouble, for the first time, of cutting out circles of parchment paper to go on the bottom of the cake pans. Worked like a charm - just ran a table knife around the edge of each pan, the cake popped right out, and then the parchment paper peeled right off. Very nice.

Fresh out of the oven: 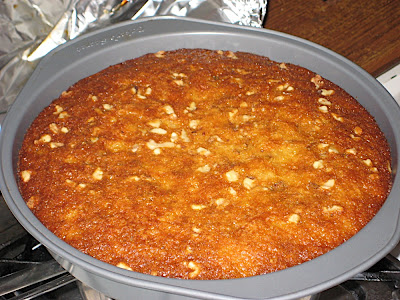 Cake disguised as The Blob: 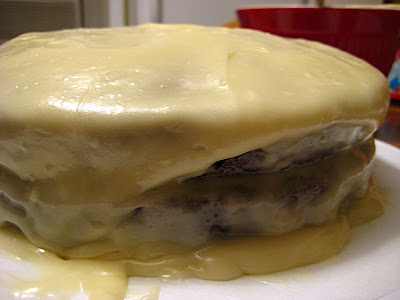 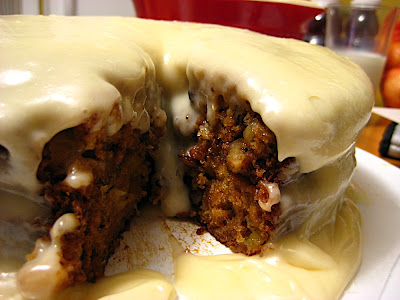 Well, it's been fun. Hope everyone enjoyed Whip It Up as much as I did. More later on why my life is going to get very busy in the immediate future (has to do with job, not personal life - no babies, so don't freak out), so I'm relieved this is the last week. But yay for my first communal blogosphere experience.

VOTE FOR OBAMA!!
by PeaceLoveMath at 9:28 PM